The United States is home to an array of aquariums which display thousands of gorgeous or downright adorable sea animals. What’s even more exciting is that most of these establishments are non-profits that focus on conservation and preservation of our coasts and ocean, rather than captivity of animals. When visiting, guests are educated about the environments of these precious species, while staff research to find new ways to save each precious habitat. Out of all the aquariums in America, these are the most fun to visit. The Georgia Aquarium sits near Olympic Park and the World of Coke. Not only is this exciting Atlanta-based attraction one of the largest, but it’s also quite diverse as well with a wide range of rare sea life such as whale sharks. Guests can go “behind the scenes” for more detailed, informative tours, and an up-close look of some of the exhibits. Many interactive demonstrations, and shows like the incredible dolphin event, add to the awe-inspiring visuals at the Georgia Aquarium. You can eat onsite, but if the prices are a bit much, an iconic Varsity chili dog with onion rings and a Frosted Orange is nearby. Audubon Aquarium of the Americas, New Orleans (Nearby Hotels)

Audubon Aquarium of the America’s, in New Orleans, is inside Woldenberg Park, along with a zoo and insectarium. You’ll see an array of colorful fish weaving through coral, and you can even snorkel the reef habitat. Around 530 different sea species call Audubon home. What’s really cool is that there is information about the native ecosystem of Louisiana, particularly around the Mississippi River, and the nature center does a great job telling visitors how this part of the world connects with the rest. Chicago’s Shedd Aquarium is appropriately located on the shores of Lake Michigan and is surrounded by a lovely little trail for some great outdoor pics. Operating since the 1930s, it contains triple the amount of animals and sea creatures of Audubon. With 32,000 animals and 5,000,000 gallons of water, it was at one time, the largest. While maybe that title has been taken, the historic Illinois fixture is nothing short of amazing. Parking can be up to $25 extra, so be sure to plan for that. National Aquarium is located in the harbor of Baltimore, right on Pratt Street. A stunning glass pavilion accents the Living Seashore, Atlantic Coral Reef and Sea Cliffs exhibits. While you’re there, don’t miss the dolphin show or a walk through the recreated rainforest, both of which are quite awesome. With multiple floors and cool views of the actual ocean via the harbor, this is a neat aquarium to toss on the bucket list. Monterey Bay Aquarium, Monterey (Nearby Hotels)
Monterey California houses the Monterey Bay Aquarium, which opened with a bang in the 1980s by featuring a first of its kind kelp forest. With a marine-rich location on rock-laden shores of the west coast, the staff here have directed their focus mainly to the regional sea life of their own area. 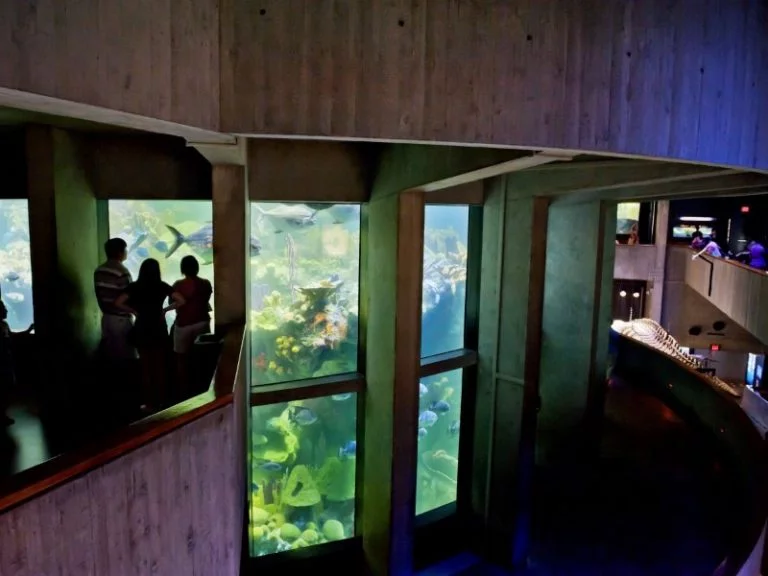 Florida Aquarium, Tampa (Nearby Hotels)
The Florida Aquarium is one of the top aquariums in Florida, perfectly located in Tampa. Proximal to dreamy beaches like Clearwater, planning a vacation to the aquarium means that the family could effortlessly fill a week-long itinerary. Also a non-profit, the focus is to educate visitors about the natural environment, and how to protect it. Currently, coral reef and sea turtle preservation are on top of the list for the experts. Swim or dive experiences are also available, and visitors can actually get in the tank with reef fishes, sea turtles, moray eels and sand sharks— now that’s up close and personal. If you purchase one of these special tickets, admission to the rest of the aquarium is free! Tennessee Aquarium, Chattanooga (Nearby Hotels)
Visiting the Tennessee Aquarium has become a tradition, as kids who used to visit the aquarium are now bringing their own kids. Located on the lovely river, this popular attraction in Chattanooga facility focuses on creatures that would be found in the habitat right outside its own doors. You’ll see environmental foliage and animals from swamplands and the Appalachian mountains, while of course more exotic displays are onsite, such as the penguin and reef exhibits. But the focus on local terrain is quite exciting when visiting Tennessee because it adds more to your experience in the region! Ripley’s Aquarium of the Smokey’s, Gatlinburg (Nearby Hotels)
As if Gatlinburg wasn’t already super exciting, they also have the Ripley’s Aquarium of the Smokey’s, which is less gimmicky than the chain’s other outlandish museums and attractions. Legit exotic fish species fill stunning, modern displays, and like many aquariums, there’s an awesome walk-through tunnel that makes guests feel as if they are walking amongst the fish. Kids will particularly love the indoor slides and opportunity to reach in and touch certain sea creatures. And everyone gets super excited about the glass bottom boat ride over the indoor shark lagoon.